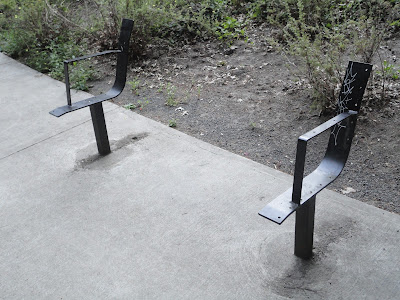 Let Me Show You Something

A man stood on the porch of his row home, smoking and drinking a beer.

“Nice night,” he said as I walked past on my way to the coffee shop. “Want a beer?”
Though I had turned 21 the previous December, I rarely drank, but I said okay and followed him into his living room. He grabbed a beer from the kitchen then gestured to me to sit on the couch. He sat on an easy chair and pointed at a photograph sitting on the end table between us. It was a sepia-toned picture of a young woman with long, blond hair riding a horse.
“She’s pretty, huh? You like her?” he asked. "How about horses, you like horses?" He told me he worked as a dishwasher at Henry's Salt of the Sea, which was right around the corner from the coffee shop.
“You like to play pool?” he asked. “I have a pool table in the basement. Come see.”
I followed him downstairs. There was a pool table and not much else aside a neon Miller sign glowing on the wall.
“Nice, huh?” he asked. “Sometimes I like to come down here and play naked. Really relaxes me.” I thanked him for the beer and said I needed to go. He followed me upstairs, telling me that I didn’t have to go, that should have another beer, that I should stop by again sometime, anytime. He stood on the porch as I walked away, my breath ragged, my heart pounding.

A tiny old man sat across from me on the bus, dressed in a three piece suit. He kept smiling at me and finally started up a conversation. It turned out we were both on our way to the library. He talked nonstop about his house which he'd bought decades ago for a song, back when he was a traveling salesman. We got off at the library and we walked in together. He followed me around until I finally told him I needed to go get some work done, at which he told me he was there nearly every day and would surely see me again sometime.
I saw him there a few weeks later. He was excited to see me and once again started babbling on. He said he wanted to show me something, and opened his wallet and took out a black and white photograph of a young shirtless man on a beach. “Guess who,” he said, his eyes shining. “I was in pretty good shape back then. Lifted a lot of weights.”
I noticed one of the librarians watching us. I’d known her since I was a kid. When I finally got away from the little man she ran up to me and whispered, “Was he bothering you at all?” I said no, that he just seemed lonely and talkative. She looked around. “He’s been coming and following young men around. We’re probably going to have to have him ejected. You sure you’re okay?” I told her I was fine and thanked her for telling me, then promptly left. I didn’t go back to the library for a long time after that.

My coworker and I were standing behind the counter when an elderly gentleman brought his items over. The man was very friendly and we were all talking and joking around while my coworker rang him up.
“Here, let me show you something,” the man said. He opened his wallet and took something out. “My baby picture,” he explained. It was a photograph of a sweetly smiling infant sporting an enormous erection.
“Oh my God,” my coworker said, both of us laughing in surprise. The old man grinned and put the photo away and took his bags and left.
The more he thought about it, the more upset my coworker seemed to get. “Was he hitting on me?” he asked. I hadn’t even considered that. I had thought it was just a harmless dirty old man playing a prank, but now I felt a little bad for having laughed.

A white car pulled up to the curb as I was waiting for the bus one night. The man behind the wheel sported a large black mustache. He asked me if I wanted a ride. I said no thanks.
“Come,” he said again, patting the passenger seat. “I give ride.” I said no and looked away, trying to ignore him. When I looked back he was still sitting there staring at me intently. “Come on," he said, looking and gesturing at me to get in. "Come on.” I looked around; it was a quiet night with no one walking around and no other traffic. I decided not to wait for the bus after all and started to walk away. He followed alongside me. I turned down a side street and started to walk faster. A block later I saw him again, circling the streets slowly. I ducked into an alley and started to run.
All that night, everywhere I went I kept seeing that white car cruising along the streets of downtown, kept seeing his face staring at me, his hand beckoning to open the door and get inside.

Reveling in the Irrelevancy

Who still keeps a blog anymore? Old people? Weirdos whose knowledge of the internet stops around 2005? Have we maybe come full circle, to the point where they're cool again, albeit in a retro kind of way? I doubt it. To be honest, I'm surprised Blogger still exists.

I've been publishing things under the name ant vs. Ant for 14 years now, so figured it was time to just make it official and call my blog that too. I mean, what is this other than a thinly-disguised marketing tool?

Anyways, along with hawking my wares (mostly printed by the fine robots at lulu.com), I'll still be posting new works in progress, as well as drawings and paintings provided I ever pick up a paint brush again.

Thanks for stopping in, feel free to leave comments in the comments section, or contact me at carrioncall@gmail.com.